Light Emitting Diodes as we know are PN Junction diodes which emit light when forward biased. Well, lets say they simply emit light! They come in various packages through hole as well as SMD. They are basically used to: 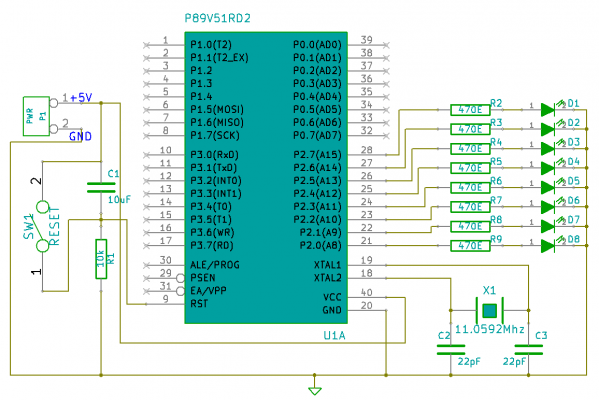 The schematic can be divided in two logical parts for the micrcontroller, the minimum connections required are discussed in the first section, which will be common for any interface. The second section describes the LED interfacing section.

To make a micrcontroller work, following components are required:

As we know, providing a logic 1(5v) from microcontroller pin to the anode of the LED, keeping common ground, glows the LED.

The 5mm Led used in this tutorial has a forward voltage of 2v and maximum current rating of 20mA. The microcontroller provides a 5V output on a port pin, hence to limit the current to 10mA a resistance of 470Ω is used in series with the LED.

8 LEDs are interfaced to PORT2 of the schematic as shown. You may wish to connect to any of the other ports as well. You may wish to go for a simple development board ULTRA_X51, which has a inbuilt power supply and serial communication circuitry required to transfer the hex file to the microcontroller. This would get you off the ground quickly.


The code is divided mainly in to two sections for all the interfaces.

This makes the code reusable. Whenever a interface, or feature is required to be tested, a source file(e.g lcd.c) and a corresponding header(.h) file is included.

So, lets start with a simple example. The entire project can be downloaded from the link at the end of the page. You could view a step by step procedure to configure the project in the 8051 tools set up tutorial.

The code below is included in Led_Blinking.c file. This file contains the main() function with which execution of the code begins. Lets look at the first two lines of the code


As discussed earlier, the delay.c contains functions to generate the required delay. It can be accessed here.

Would like to have your feedback and suggestions here;