In this tutorial we will discuss, the internal architecture of 8051. Well, not to worry; we will break it down in smaller pieces to understand it. I think a basic understand of Digital electronics would help. Nonetheless, for using 8051 in interfaces and applications, you might just go through it once. Being said that, a through understand will not only help in understand microcontrollers in depth, but will also help in programming efficiently. 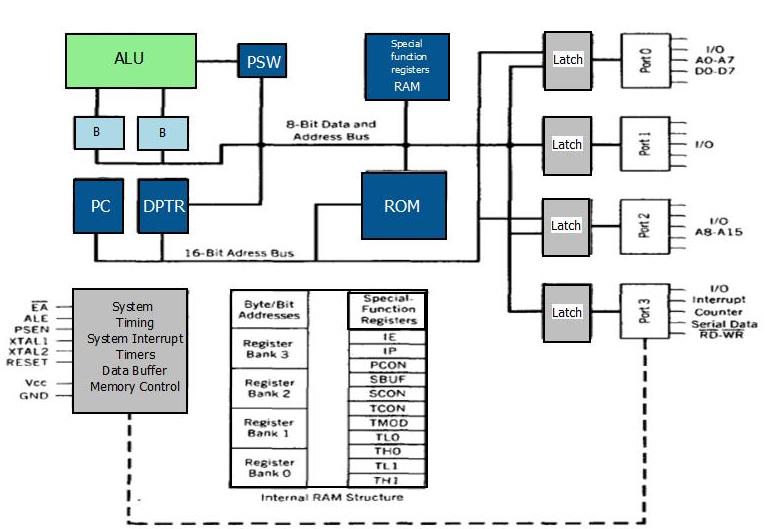 As we have seen in the Previous tutorial, it basically consists of a ALU, RAM, ROM, IO Ports, Timers/Counters, Serial Port and Interrupt Structure. Well, it also has some internal resisters.


Let us start discussing the ALU, as it is the main unit. Understanding of ALU, will allow us to put other units in their place.


ALU performs arithmetic like addition, subtraction, multiplication and Logical Operations like NAND, NOR etc. Since 8051 is an 8 bit microcontroller, it takes input from two 8 bit registers namely A and B and processes them. If would like a deeper insight as to how an ALU is built from basic building blocks(logic gates) you may go refer to this tutorial:(4 bit ALU in detail). It would give you a deeper understanding of the microcontrollers, and it it would link your basic concepts like logical gates to the microcontrollers. The commonly used registers are R0 to R7, A, B, PSW These are all 8 bit registers. The registers associated with the ALU are A,Band PSW. In most operations, ALU performs specified operation on registers 'A' and 'B' and the result is stored back in 'A'. Hence Register 'A' is often called accumulator.

'PSW' indicates various flags associated with the operation performed. Figure below shows the 8 bits of the PSW register and their function is shown in the table.

There are also some 16 bit registers in 8051 as shown in the figure. The program counter points to the next instruction that the CPU executes.

The DPTR and other special function registers like SCON, TCON,P0,P1,P2 etc will be discussed while using microcontroller features like timers, counter, serial communication, Interrupts etc.


Figure Below show Internal RAM of 8051 it is divided into 3 main sections: 
We will discuss Interrupts, Timers, counters, and Serial Communication in detail with concrete examples in upcoming tutorials.


Figure 1 shows the pin diagram of a 8052(only difference is that it has some addition features). In fact we will be using either a AT89S52 OR P89V51RD2 in our interfacing tutorials. As we can see there are four 8 bit ports P0,P1,P2 and P3.
All the ports can be used either as input and output. You would also observe some of the pins have additional functions. We will discuss additional features with relevant topics. Input/Output pins are widely used to interface a microcontroller with the external peripherals, like LEDs, SevenSegments, LCDs, Motors and the list goes on. Although most of the peripherals are not connected directly, it is essential to understand the way in which micro-controller, reads or writes bits to the port pins. The micrcontroller sends and receives binary 1s or 0s on each of the pins. All the four ports are similar, expect P0 which deos not have internal pull up. To write 0 to pin of the microcontroller:


To write 1 to pin of the microcontroller: To read 0 from the pin of the microcontroller:

Would like to have your feedback and suggestions here;